For the Love of… 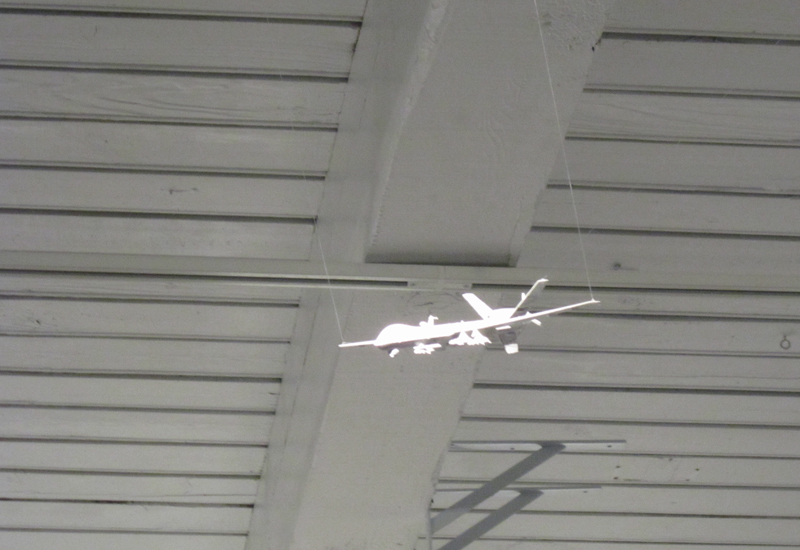 In 2012-13 I was awarded a HATCH Projects residency at the Chicago Artists Coalition and I made it a goal to generate new work. Not just explorations of familiar topics but the complete investment in a totally new line of inquiry. In particular I had been interested in the public conversation of UAV, or drone, warfare. As complex a topic as it is, I chose to address certain aspects: general perception as well as what it means for surveillance tactics and technology, a portending of a particular existential state, or even as an extension of my hobby practice of scale modeling.

The phenomenon of the air show also holds my interest for a number of reasons, paralleling the UAV explorations. As these technologies develop, so does the conversation surrounding these tools. This is a paradox: how can something exist both as a tool to propagate the theater of war and as a function of cultural/global relevancy in a rapidly expanding technological ecosystem? With the case of For the Love of… — an installation composed of hundreds of various scales of MQ-9 Reaper UAVs (or drones) and a wireless surveillance and projection system — I was curious about the nature of public awareness of these issues. Another aspect of developing these ideas was to gauge viewers’ response to the rise of these systems of surveillance. At first entering the installation space, the view might notice the swarms of drones and think back to boyhood bedrooms with model airplanes hanging about. But as they wander further in they might notice a pattern to the swarm; that the viewer is being herded. The climax, so to speak, of the experience is the realization that they are being watched, though the ubiquity of the UAV’s prevents a pinpointing of source of surveillance.

Through interdisciplinary, new media and traditional art-making processes, Nicholas Sagan’s work explores the connections, parallels and paradoxes that exist between art, science, technology and culture. Some of his more recent experiments deal specifically with installation and performance as mediums through which scientific imagery and data archives can be accessed and aesthetically interpreted. Recent threads of inquiry explore the public perception of surveillance in conjunction with the modern theater of war within the context of the airshow. He has exhibited throughout Chicago, Minneapolis/St Paul and currently teaches at the School of the Art Institute of Chicago and Columbia College Chicago.