In Drones We Trust 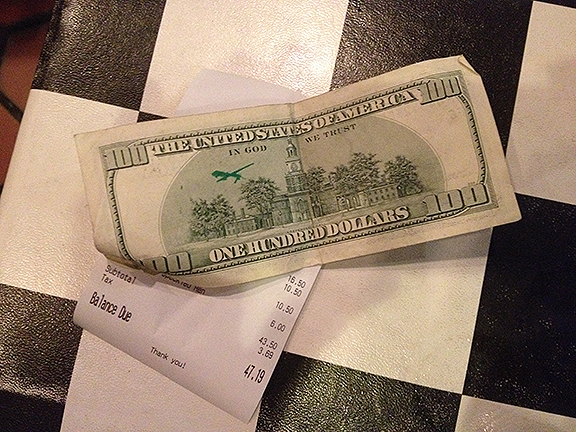 A participatory project inviting volunteers across the United States to rubber stamp a tiny image of an MQ1 Predator Drone on the back of their money. The idea came after closely examining U.S. currency – all but the $1 dollar bill feature a pastoral depiction of a notable government building or monument on the back of the bills, albiet with lonely, empty skies. It seems appropriate, considering our current use of drones in foreign skies, to symbolically bring them home to fly over our most notable patriotic structures. I’ve created 100 of these laser etched and hand assembled rubber stamps which are currently being shared with volunteer participants throughout the United States and a few internationally. I’ve invited participants in the project to each send me one image of a stamped bill, noting location and date where the bill was stamped and put back into circulation. The project has been created as part of my work as an Artist in Residence at Instructables.com/Autodesk Inc. Further images will be posted in the coming weeks.

Joseph DeLappe is a Professor of the Department of Art at the University of Nevada where he directs the Digital Media program. Working with electronic and new media since 1983, his work in online gaming performance, sculpture and electromechanical installation have been shown throughout the United States and abroad – including exhibitions and performances in Australia, the United Kingdom, China, Germany, Spain, Belgium, the Netherlands, Mexico, Sweden and Canada. He has lectured extensively regarding his work, including the Museum of Modern Art in New York City. He has been interviewed on CNN, NPR, CBC, the Australian Broadcasting Corporation and on The Rachel Maddow Show on Air America Radio. His works have been featured in the New York Times, The Australian Morning Herald, Artweek, Art in American and in the 2010 book from Routledge entitled Joystick Soldiers The Politics of Play in Military Video Game. He has authored two book chapters, including “The Gandhi Complex: The Mahatma in Second Life.” Net Works: Case Studies in Web Art and Design, (New York, Routledge 2011) and “Playing Politics: Machinima as Live Performance and Document”, Understanding Machinima Essays on Filmmaking in Virtual Worlds,