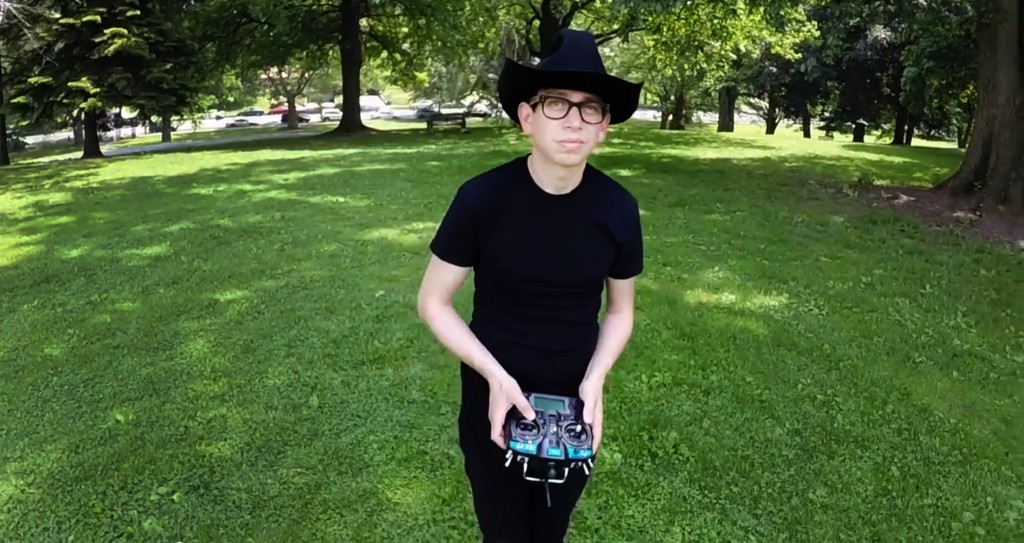 The selfie is a widespread phenomenon of recent times that in and of itself carries many social meanings related to identity, egotism, celebrity status, privacy and more. Now combine the drone and the selfie. The drone frees the selfie to go beyond arm’s length. It can take in the landscape, and the person can become small. Images from way up high shrink the drone operator into a small figure with no clear identity. But there still are closer images, even close up’s.

Most of the figures in these images appear anxious. They are leaning to and from. Their eyes are not directed at the lens. These are not the smiling conventional faces of selfies. They are people aware of the oddity and possible hostility to their drones. As a result, some strike combative poses. Others are tentative. Drones can spy and be weapons, and the images capture the anxiety of the potential accused. On the other hand, the children are unaware and therefore carefree, more like the conventional selfie.

There is unintended humor in most of the images. The viewer feels like these are in some way private images, and the only subjects in most of the images are the drone operators. They are alone and chose that setting, almost always secluded. But the images were posted on and taken from youtube. You don’t want to laugh at the subjects because they look vulnerable. The premise on youtube is that these are their firsts “dronies”. So add the additional anxiety of first time images. We are left with mostly images expressing society’s anxiety about drones in the faces of proponents of drones.

Kathleen Rogers is a digital artist and photographer in the metropolitan NYC area. As a teen she traveled to the Soviet Union and saw the anxious faces of the citizenry. This trip planted a seed and she went on to do graduate study in Russian history at Columbia University. Kathleen uses internet media and cameras to create groups of images both as art and social commentary. Her most recent exhibited work was in the 2014 exhibition SECRETS AND LIES shown both in Cambridge, England and Brooklyn, New York.