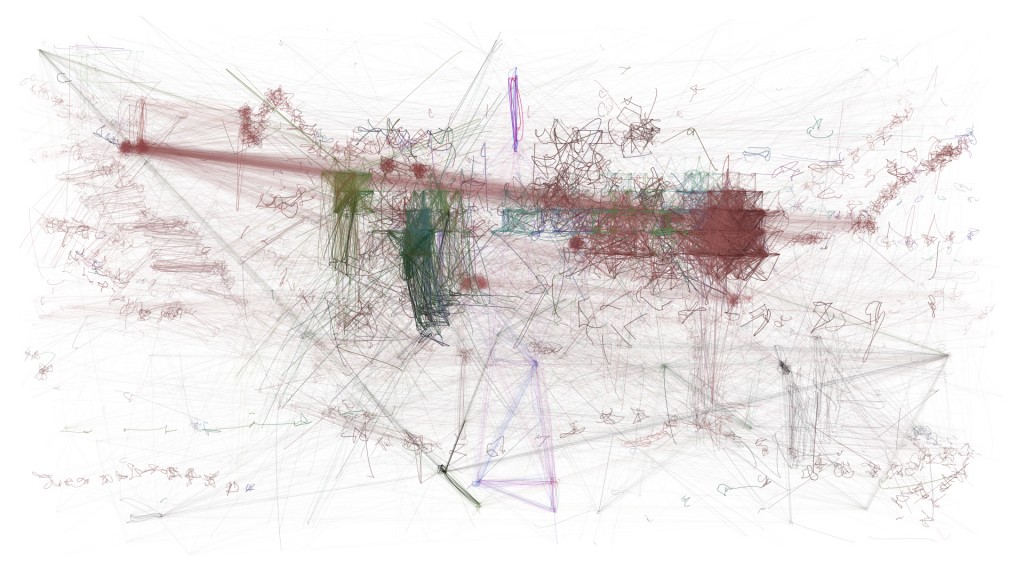 statement
Computers Watching Movies shows what a computational system sees when it watches the same films that we do. The work illustrates this vision as a series of temporal sketches, where the sketching process is presented in synchronized time with the audio from the original clip. Viewers are provoked to ask how computer vision differs from their own human vision, and what that difference reveals about our culturally-developed ways of looking. Why do we watch what we watch when we watch it? Will a system without our sense of narrative or historical patterns of vision watch the same things?

Computers Watching Movies was computationally produced using software written by the artist. This software uses computer vision algorithms and artificial intelligence routines to give the system some degree of agency, allowing it to decide what it watches and what it does not. Six well-known clips from popular films are used in the work, enabling many viewers to draw upon their own visual memory of a scene when they watch the work. The scenes are from the following movies: 2001: A Space Odyssey, American Beauty, Inception, Taxi Driver, The Matrix, and Annie Hall.

biography
Benjamin Grosser creates interactive experiences, machines, and systems that explore the cultural, social, and political implications of software. His works have been exhibited at Eyebeam in New York, The White Building in London, the Media Art Biennale in Wroclaw, the Digital Arts Festival in Athens, FILE in São Paulo, the Telecom Italia Future Center in Venice, and Museum Ludwig in Cologne. Grosser’s artworks have been featured in Wired, The Atlantic, The Guardian, the Los Angeles Times, Creative Applications Network, Neural, Rhizome, Hyperallergic, Al Jazeera, Corriere della Sera, El País, and Der Spiegel. The Huffington Post said of his Interactive Robotic Painting Machine that “Grosser may have unknowingly birthed the apocalypse.” The Chicago Tribune called him the “unrivaled king of ominous gibberish.” Slate referred to his work as “creative civil disobedience in the digital age.”