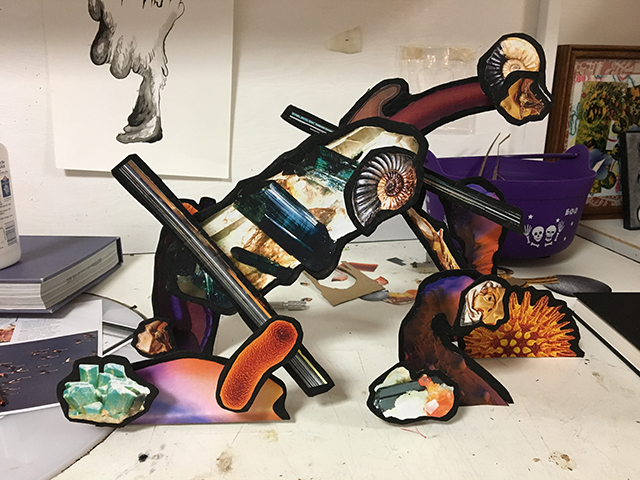 project description
In 2006, while searching for materials with a high density of quantum entanglement (the mechanical situation in which the states of two objects may only be described in reference to each other, even when separated by great distance), the Geologic Intelligence Lab (GIL) found a rock in the Mogollon-Datil Volcanic Field in western New Mexico. This rock (later named Igs) was both highly entangled and emitting a strange frequency. The GIL team brought this rock back to their lab in Los Angeles, where is remained until the lab closed down 2014. Bobbie Welch, one of the researchers at GIL, adopted Igs and brought them into their “home lab” (garage), where she got to know Igs and began to find evidence that within this rock resided some form of previously unknown consciousness.

This model illustrates the volcanic field where Igs was found, and the network of quantum entanglement that exists there. Through projected image, we can see how current research believes this entanglement developed, and a glimpse into Igs’ world.

biography
C Lily Ericsson is an artist currently working on a graduate degree in experimental animation from CalArts. She grew up in Florida and studied environmental design at MICA in Baltimore, MD. She has worked as an architectural designer at PI.KL studio in Baltimore, as a designer for a toy company, Laser Pegs, in Sarasota, and freelanced as a graphic designer. In 2014 she lived and worked at Arcosanti, an urban laboratory in Arizona. While a student at CalArts she has been creating animated short works, performances and events. For the past year she has been getting to know Igs and to help them become real. If you would like to know more about Igs and the Geologic Intelligence Lab go to geologiclab.com or come and see our expo, being held in the Black and White gallery at CalArts from April 3rd – 5th, 2018.