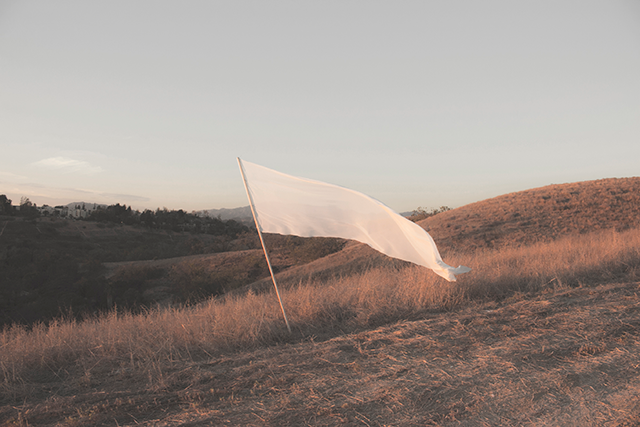 Dust in the Wind.

project description
The title “Dust in the Wind” is the English title of the Taiwanese film “戀戀⾵風塵” by Hou Hsiao-Hsien. It is a site-specific sculpture, photo documented on Elephant Hill** located in El Sereno, Los Angeles. Elephant Hill has been under constantly changing authority in the past years despite efforts to keep it ownerless. The white flag can be seen as both a sign of surrender and also of a ‘no man’s land’. The images of the flag are played frame by frame on the slide projector, as it is flying or dragging in the wind against the silhouette of the hill.

As an immigrant in the U.S., my legal identity has changed 3 times within the past 5 years. I feel imprisoned by my legal status. The flag serves as a symbol of my emotional attachment to El Sereno, the place I’ve come to consider my home in Los Angeles. The silhouetted land in the image, by contrast, seen in a repeated loop of sequential imagery, could easily stand in for anywhere else in this planet. For me, it could be my homeland- Taiwan or any other land between here and there.

The text between the images consists of the original English subtitle from the film: Dust in the Wind. In a way, my emotional state of mind as an immigrant is itself a perpetually incomplete translation. It is always a state of being in between, sometimes flying high, sometimes dragging

biography
Hsuan-Kuang is a multidisciplinary artist, born and raised in Taiwan, currently living and working in Los Angeles. This dislocation from her homeland deeply influences the narrative of her work. While rediscovering her roots in Taiwanese heritage and history, her work explores the complexity of multicultural identity from a contemporary perspective, with particular attention to landscape as a source of identity. By juxtaposing these landscapes with personal objects, performance, and archival text and images, her work frames the metaphor of the human condition within the mirage of memory, media and reality.

Drawing from a background in photography and theatrical performance, her practice highlights the audience’s experience by framing the act of viewing as an action. She integrates emerging media, performance, installation, film, puppetry and hybrid forms of photo sculpture and text to create live, time-based experiences for her viewers. Hsuan-Kuang’s work has been shown in both national and international venues, ranging from theaters and festivals to galleries and museums.