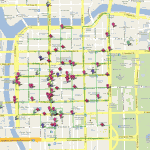 SUMMARY:
The applicants propose to develop and curate a collection of Augmented Reality are works that will interrogate social and political meaning/s of public space.

Artist interventions in public space were formerly relegated to one of two strategies:  officially approved and funded work,[1] and guerrilla interventions[2].  New technologies provide an opportunity for individual interpretations of public space to become available to a broad audience and make it possible for alternative histories, political statements, and artistic mediations to be widely seen and heard.  Our collectives, unreal-estates and v1b3 propose a project to be executed jointly with other invited artists that will “tag” various downtown locations in the Chicago loop with artist-created messages to be accessed through mobile devices and AR (augmented reality) point of interest markers and other location-based tagging systems[3].

Collaborating artists will choose several landmarks and infrastructural features for participating artists to interpret or embellish.  For example, on July 14, a 26 foot high statue of Marilyn Monroe representing a moment from the film “The Seven Year Itch”, was installed on Michigan Avenue. Monroe is visualized standing over an opening of the New York subway ventilation system.  This statue could exist as a virtual representation linked to a vent in the sidewalk. This same vent could be interpreted by another artist as the site of a homeless person’s sleeping quarters. The Marilyn statue itself could spawn a variety of works that might address gender, media and representation.  Content, decided by the participants, might be personal, political, oppositional, historical, or purely imaginative.

The art works will be unveiled in August of 2012 in conjunction with the University Film and Video Association conference, where collaborating artists will present a panel on its creation and the contemporary redefinition of “public art”.  AR requires devices that are equipped with:  GPS for location tracking, compass for directionality, accelerometer for tilt information, camera for seeing the real world as background, and connectivity for access to AR overlay information.  While these conditions are typically met in iPhone and Android devices already owned by many individuals, we want to make the works as widely available as possible.  To this end, guided tours will be provided with a number of mobile devices that will be available for checkout through Columbia College, the conference sponsor, and later through a participating partner already involved in community interpretation such as Threewalls itself.

Augmented Reality has already achieved recognition as an interventionist artform that crosses the barriers of the virtual and the real. This medium makes possible a previously unavailable level of access to real time and place information that provides non-destructive interpretation and critique.  It puts the user in control of  the “filter” through which s/he sees the world, and makes available a number of points of view, narratives, and histories which typically remain hidden.

The project enlarges upon the ongoing dialog about the nature of public space.  In 1986, Rosalyn Deutsche commented on the ability of Krzysztof Wodiczko’s Homeless Projections to critique and redefine the space of Union Square Park in New York City.  The Projections used public monuments in the park as backdrops for full scale projected images that overlaid their heroic, equestrian presences with images symbolic of the disenfranchised being replaced by the rich and powerful in the “urban renewal” then in progress.  Augmented Reality has the ability to make these commentaries commonplace, to bypass the traditional gatekeepers of culture who decide what messages are allowed.  Unlike graffiti, which expresses an understandable desire for identity, power and presence, AR does not obscure or damage; it merely adds another layer to our urban landscape.  AR allows artists’ messages to compete with those of advertisers without the typical censorship and bureaucracy involved in establishing a public presence, an extraordinary leap forward in freedom of expression.

note: This project has been awarded a 2011 Propeller Fund  Grant which provides 1/3rds of the requested budget.

“Propeller Fund is administered by Gallery 400 and threewalls. Funding for the initial years of Propeller Fund is provided by a grant from the Andy Warhol Foundation for the Visual Arts. Chicago is the third community to be selected by the foundation in a program to locally regrant funds for on-the-ground, self-organized artistic activity.”

[1] Work such as those installed in Millenium Park – the Crown Fountain, Cloud Gate, Agora, etc.

[2] For example, the recent knitting of socks for the equestrian statue of General Logan on 11th and Michigan Ave, or the ever popular spray painted graffiti.

[3] For example, the LAYAR application that displays 3D models, music, video, images, and/or text that correlate to real world objects and locations. http://www.layar.com

BIO/CV:
unreal-estates began with its initial project, Home. This extensive, on-line VR environment developed from an early version of a Home Page, created in 1994, which noted how our notion of home has been influenced by the increasing placelessness of the web. Home, in its final version, used web 3D to provide a navigable environment including a suburban neighborhood and a home that could be entered and explored. Six character voices interwove personal (fictional) histories with that of the house itself, and fourteen artists contributed media works on personal identity and home that linked to the 3D environment. Home was re-configured for the CAVE, a multi-user Virtual Reality system, and is now in the permanent collection of the Ars Electronica center in Linz, Austria. Unreal-estates has gone on to create other works reflecting on the links between place, identity and politics including River of Many Sides and Path of the Dragon, respectively a media performance and interactive installation that grew from a collaboration with two Vietnamese artists. Streaming, done as part of a residency at Bradley University, was an interactive environment in which the visitor encountered some of the human-induced changes in the river. Peoria, home to Bradley, is on the Illinois River, part of the Illinois waterway between Chicago and the Mississippi. Principal artists are Drew Browning and Annette Barbier. http://www.unreal-estates.com

v1b3 is an international curatorial project that aims to present video art that responds to the conditions of site specificity and a public viewer-ship. Urban planners and architects shape cities by means of infrastructure, zoning and buildings. However, other modes of intervention exist capable of influencing the development of city-space. v1b3 brings attention to communicative media interventions to transform public spaces.

Past projects have been shown in the UK, Australia, Singapore, Canada and the United States. To date over 70 artists have participated.

v1b3 Video in the Built Environment was initiated by Mat Rappaport, Conrad Gleber & John Marshall and Cezanne Charles of rootoftwo to explore the proliferation of video screens and projections and their impact on urban space. Their collaboration is open to other artists, architects and designers interested in similar issues.

Associated with v1b3 is rootoftwo; a hybrid art and design studio. rootoftwo collaborate to make experimental objects and experiences that challenge assumptions, undermine expectations and reveal conventional behavior. Their works engage both audience and context. rootoftwo was founded in 1998 by Cezanne Charles and John Marshall

current: Mat Rappaport
current is a public video installation along the Delaware River, exploring the river as a historic conduit of trade. current combines interactive video with a high-power light beam to spell out a Constitutional passage in Morse code. The video turns off and makes a tone as the light turns on.

A public digital mural in Anchorage, Alaska that combines text from interviews with residents or visitors, poetry by Alaskan writers, and photographs tagged with unique Alaskan themes from the Internet. The photographs refresh for 12 hours and each experience with the mural is unique.

Preserving Disorder: Drew Browning
An interactive sidewalk projection, recalling the images and dynamics of the summer of ’68 in Chicago.

Documentation of site specific installations at 11th and Wabash, Aug. 2005.