The Terrain Biennial is an international exhibition of site specific art made for front yards, balconies, and porches. Centered in the historic village of Oak Park, IL, the 2017 Biennial with kick off on Sunday October 1st with a block party in Oak Park, IL and run until November 15th. Neighborhoods throughout Chicagoland will host performances, film screenings and other events in conjunction with the festival. A map of all locations and the dates of the openings for each neighborhood will be posted to www.terrainexhibitions.com.

Founded in October of 2011 by artist Sabina Ott and Author John Paulett, Terrain Exhibitions and the Terrain Biennial repurpose private spaces such as front yards, porches, or windows, turning them into public spaces in order to foster dialogue between neighbors and provide opportunities for artist and viewers alike to experience new perspectives. The projects at the 3rd Terrain Biennial will range from sculptural installations to time-based performances to public interventions.

The opening of Terrain Biennial: Evanston will be held on October 7 from 4-7pm and will feature performances and walking tours of the artworks. For more information about the Evanston projects, visit bit.ly/terrainbiennialevanston. For the full list of the 3rd Terrain Biennial sites, visit terrainexhibitions.com.

This project/program was made possible in part with funding from the Evanston Arts Council. 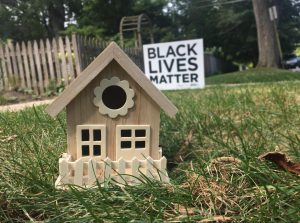 Bio
Ben Blount is a designer and printer that uses books, posters and installations to explore notions of race and identity in America. Shaped by two decades of experience in design and advertising, his work draws on a common cultural language of objects, stories and experiences to draw attention to the differences between what we see, and how we are seen. With a range of contemporary influences from Dave Chappelle and Kara Walker to Mos Def and Amos Kennedy, Blount’s work is often provocative and topical. He has taught book arts and and shown his work throughout the US. A native Detroiter, he earned an MFA in Interdisciplinary Book and Paper Arts from Columbia College Chicago and currently lives in Evanston, IL. 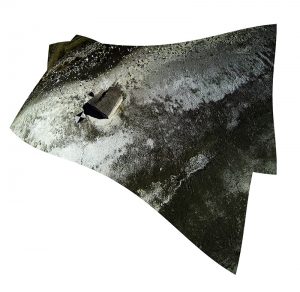 Description
A series of temporary sculptures that reconfigure reference markers used in aerial cartography. These studies are connected to an expanding body of work (Visible From Space 2009-present) the outcomes of which include installations, performances, videos, outdoor projections, prints, handmade paper, artist books, essays, and site-specific events. Visible from Space erupts from a thought

Description
4 metal buckets – suspended with piano wire along the sidewalk – and activated by small motors and a custom programmed piece of software which captures the organic patterns of cicada rhythms. This all creates a kinetic sculpture that throbs and drones with all the energy of the surrounding cicadas, but with a sound all its own.  As rain gradually fills the buckets over time (if it actually rains) the acoustic footprint of the piece will change throughout the exhibition.

Description
In a time of 24 hour news and an unpredictable national leader, Lichty and Rappaport have created a piece which provokes and invites viewers to respond to our current political context. The video, an early press conference in which Donald Trump was unable to “stay on message” has been extended to play as a twentyfour hour loop. Installed in a residential basement window as part of the 2017 Terrain Biennial, the image of Trump is a horror looming in wait. Audience members are invited to mark blank yard signs with their messages and responses. The structure video borrows from the famous Douglas Gordon video of Alfred Hitchcock’s film Psycho which stretched the film’s run-time to 24 hours.

Lichty Bio
Patrick is a conceptual artist, curator, and theorist exploring how media shape our perception of reality as well as the borders between the digital and the materal. He is best known for his work with the virtual reality performance art group Second Front, and the animator of the activist group, The Yes Men. He is a CalArts/Herb Alpert Fellow and Whitney Biennial exhibitor as part of the collective RTMark. He has presented and exhibited internationally at numerous biennials and triennials (Yokohama, Venice, Performa, Maribor, Turin, Sundance), and conferences (ISEA, SIGGRAPH, Popular Culture Association, SLSA, SxSW).

Rappaport Bio
Mat Rappaport’s artwork has been exhibited in the United States and internationally in museums, galleries, film festivals and public spaces including the United Kingdom and the former Yugoslavia. His current work utilizes mobile video, performance and photography to explore habitation, perception and power as related to built environments. Rappaport is a co-initiator of V1B3 [www.v1b3.com], which seeks to shape the experience of urban environments through media based interventions.

Rappaport has published essays in the iDMAa Journal and a chapter in the book Beyond Globalization: Making New Worlds in Media, Art and Social Practices by Rutgers University Press. 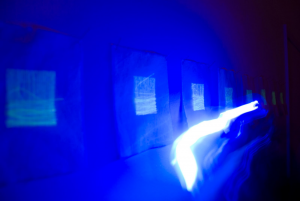 Description
Mariani will build an installation of photoluminescent thread for the Terrain Biennial.

Bio
Kristin Mariani is a Chicago based dressmaker, designer and artist. In her art and design practice she investigates hidden layers of labor discovered inside found cloth and garments, incorporating physical responses to material that emphasize process, patience, and chance. In 2000 she founded her label RedShift; a line of contemporary couture created from salvaged materials and found garments. She is faculty at The School of the Art Institute of Chicago and maintains an interdisciplinary practice creating works for dance, performance, and installation.

Description
A beginning, another beginning, the third wave. Womens March on Chicago.
65 degrees on January 21, 2017 in Chicago.
Global warming does exist. It’s getting hotter.

Bio
Niki Nolin is a media artist who works to blend painting, drawing and poetry with motion, interaction, installation and performance. Working collaboratively with artists and poets, her focus is to arouse in the viewer the conviction of a reality which exists in the spaces between words and images; intuitive gaps and leaps of faith, text and voice over time, and the disassociations and non-linearities of thought-play and choice – a digital rendering of mind and universe. Projects include work for Art Chicago, Museum of Contemporary Art Chicago, UCLA, Chicago Cultural Center, International Digital Media Arts Association(iDMAa), International Calligraphy Organization, eNarrative Roundtable Boston, the College Art Association, SIGGRAPH and many others. 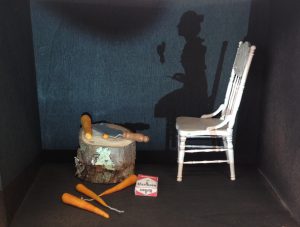 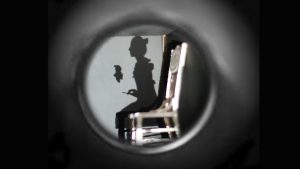 Description
New York-based artist Laurie O’Brien will create a miniature cinema installation inside a birdhouse for the Evanston Terrain Biennial. For the installation, O’Brien reimagines a fractured narrative consisting of moving shadows and still images within a diorama that incorporates a miniature film as a portal of entrapment for the viewer. The viewer navigates the entry point for an investigation of contemporary ideas around flight, home and our shifting world.

Bio
Laurie O’Brien is multi-disciplinary artist working with video, installation, performance and animation.  Her films and installations have screened and been shown in galleries nationally and internationally.  She is the creator of the Peephole Cinema, a “miniature cinema” collective with satellite projects in three cities:  San Francisco, Brooklyn, and Los Angeles.  In each city, silent film shorts are screened 24/7 through a dime-sized peephole installed in a public location.  O’Brien received an MFA from Cal Arts and currently resides between Brooklyn and Rochester.  O’Brien is an Assistant Professor of Visual Media at RIT in the Photography Department. 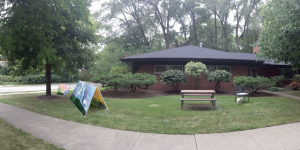 Description
A pair of small tents with paintings of sleeping figures on the sides will settle on this corner site. Sleeping giants are the mountains that resemble humans, slumbering heavily in the distance as we speed along the highway. We are the sleeping giants now, moving at a glacial pace as our country twists and turns on a new axis. Our local lives continue—work, school, eat, sleep—but we struggle with erosion of policies that protect our democratic society.

Bio
Anne Hayden Stevens is a painter and printmaker working in Wilmette, IL. Her work was included in the 2016 Rockford Art Museum Midwestern Biennial, and in the Evanston+Vicinity Biennial at the Evanston Art Center in 2011. Stevens has shown locally at the Governor’s State University Art Gallery, the Harold Washington Library Center, and the Bridgeport Art Center. 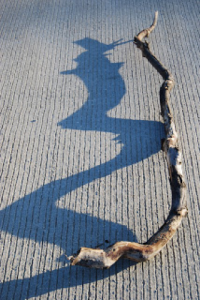 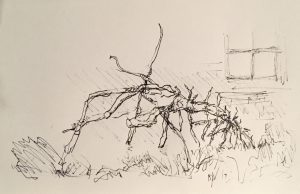 Kevin Valentine
The Structure of Memory

Description
Fallen branches are lashed together to create a structural environment dedicated to the widows of Iraq. The created space is for contemplation, remembering sacrifices made, representing the complexity and hollowness of life after conflict, but also for hope, rebuilding and peace.

These found sticks and driftwood were used by participants in drawing symbolic lines in the sand in memory of and solidarity with the millions of uncounted widows from decades of strife in the Middle East.  Each branch is dated and signed by participants who marked half-a-million lines in the beaches of Chicago, Evanston and elsewhere over several years.

Bio
Kevin Valentine works across disciplines creating work in paint, print, video, performance and installation. He has a BA in Art and Philosophy from Principia College, an MEd from Loyola University and an MFA in Interdisciplinary Arts & Media from Columbia College Chicago. Valentine’s Widowsweave project, the first project for his Artistactivist organization, highlights the living conditions of the overlooked survivors of Iraq’s thirty years of turmoil. Widowsweave project is the natural outcome of twenty years of art focusing on the relationship between the U.S., Iraq, and justice.